I've heard that before. I won't hold my breath.

Yes, perhaps a bit of an optimistic prediction, but the 737 will fly in commercial service again.

The scandal of the new Garuda Airbus which came from Toulouse and which upon customs control was found to carry Harley Davidson parts, gets more and more awkward. Now it seems the directors of Garuda were involved in smuggling the bicycle parts.

jstar said:
The scandal of the new Garuda Airbus which came from Toulouse and which upon customs control was found to carry Harley Davidson parts, gets more and more awkward. Now it seems the directors of Garuda were involved in smuggling the bicycle parts.
Click to expand...

I don‘t think Harley Davidson has made bicycle parts for a long time. Maybe 90 or 100 years.

^ Not only HD. There were many parts from Brompton bicycles on the pallets and in the roll containers as well.

After American Airlines ordering 50 planes with Airbus and having to postpone the new NMA, Boeing gets another hit; also United Airlines ordered 50 Airbus planes. For an estimated $7 billion. (They already had an order for the long range Airbus A350-900 but delivery got postponed.)

The Airbus A321 XLR should start to replace the Boeing 757-200, for medium distance flights. (E.g. east coast to Europe.)

.
Erick Thohir, the Minister of State Companies, declared in a press conference he wants to fire Garuda's boss Ari Askhara, for smuggling a Harley Davidson illegally via Garuda's Airbus A330-900 aircraft. 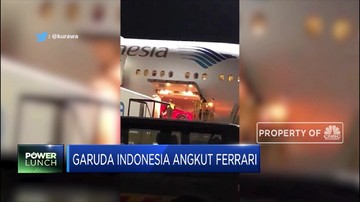 Hmm, now what is this? An early Christmas present?
.

Of course Garuda has always been a mess. The KPK has been investigating a case of bribery by Rolls Royce. They detected a 100 billion rupiah 'inexplicable' money flow. Several (former) directors of Garuda, including the former boss Emirsyah Satar, are accused.

Garuda executives (well, what is left of them) stated the company would review European flight routes in an effort to restructure the company's business. Medan - London is on hold. For the time being, the Medan - Amsterdam route will continue as usual.

"The first is business restructuring by strengthening the domestic route as a backbone. Then focus on Japan and Korea. Then, we also review the route to Europe because it is not too urgent to fly there. The point is how to make this company not lose too much. "

Boeing's CEO, Dennis Muilenburg, quits. His successor will take over as of 13 January, in the mean time the CFO will be interim boss. The production of the Max will be suspended as of January.
B

dafluff said:
Huh, funny this. I read several articles on it, and no one mentioned that Garuda folded this route in 2015 due to lack of passengers. Hopefully it will fare better now.
Click to expand...

Well, that route didn't last long.
I checked this week, trying to book a BWX-DPS for next week, and no more direct flights. But they propose you a BWX-Jakart-DPS ....Total travel time 8h ????
Not even to speak about the price !

expect more tourist to Komodo with direct flight from Singapore.

I think its a good time to buy Boeing stock.

And Garuda is in the news again....

The child of an Indonesian family flying in business class, could not use the toilet since it was too close to landing. The mother said to her husband something like "sh!tty Garuda".

Which was overheard by a stewardess. Later after landing the pilot had an axe to grind and refused to let them leave.

jstar said:
And Garuda is in the news again....

The child of an Indonesian family flying in business class, could not use the toilet since it was too close to landing. The mother said to her husband something like "sh!tty Garuda".

Which was overheard by a stewardess. Later after landing the pilot had an axe to grind and refused to let them leave.
Click to expand...

Seriously, wtf was that pilot thinking. If this story is true any reasonable airline would suspend and fire this pilot for serious lack of judgement. The so called "insult" wasn't even directed at anyone or on social media, it was just grumbling between the man and his wife which was overheard by a flight attendant.

Garuda Indonesia apologizes after family 'detained' for grumbling about flight

Garuda's acting director Fuad Rizal has apologized in a statement for the inconveniences that the incident might have caused, saying the airline was investigating the pilot who had reportedly ordered the detention of the passenger and her family.

The guy is an idiot, but let's face it; these things happen in many countries. That doesn't justify it btw.

What I find much more serious is that local media are allowed to publicize the full names of everyone involved, especially related to minors. I often notice extreme carelessness by media and local law enforcement in safeguarding identities, be it victims or perpetrators; within hours of an incident you will usually be able to find copies of the persons KTP's online. I actually wonder what local laws are in place (if any).

The mother complained that the press had published the full names of her children and she accuses Garduda to have provided that info. They deny.

I'm wondering if we will ever know the truth about the crash of the 737-800 crash in Tehran. Now that the Iranese refuse to hand over the black boxes to Boeing, it could become a cover-up.