Where to buy Apple 'duckhead' for Indonesia/EU model?

I'm looking for Indonesian (which same as EU?) model duckhead/ wall charger for MacBook. I've checked on many authorised Apple stores in Jakarta & Tangsel and they don't have it. There are plenty on marketplace like Tokopedia and so on, but they're so cheap so I doubt it it's original.
Does anyone know where to find? Is it safe to use common wall charger extension to plug in the MagSafe?
S

Just buy from Toko / Lazada etc
If cheap, buy 2
Then you have a spare anyway in case it only lasts 3 months
Usually they last longer than originals lol
R

For just that little adapter piece I would not be concerned with using a cheap one, it either works or it doesn't, there's no electrical components inside.

R Cameron said:
For just that little adapter piece I would not be concerned with using a cheap one, it either works or it doesn't, there's no electrical components inside.

there's no electrical components inside the long cable version as well?

They are all fake @Felicity . Even the chargers and Lightning USB cables sold at official Apple resellers are fake in more than 80%. There was an interesting test done by a consumer program in Europe, they bought and opened and tested cables and chargers, at premium resellers.

That doesn't have to be bad though, since Apple obviously uses contract manufacturers for their chargers anyway.

There are two possible problems; first of all they cut corners to lower costs and an Apple MFi feature. In the chargers themselves, there is a lot of circuitry and there are safety measures (minimum distance between AC and DC for instance). The cheapo brands often don't follow these regulations. The second possible issue is in the USB Lightning cable itself, there is a chip in there which can be checked by the device. At operating system upgrades they sometimes build in new algorithms to check those chips. And then you get error messages if you use non official cables. But in fact that's more the case with iPhone/iPad than laptop.

Now in your case you want the duckhead only. 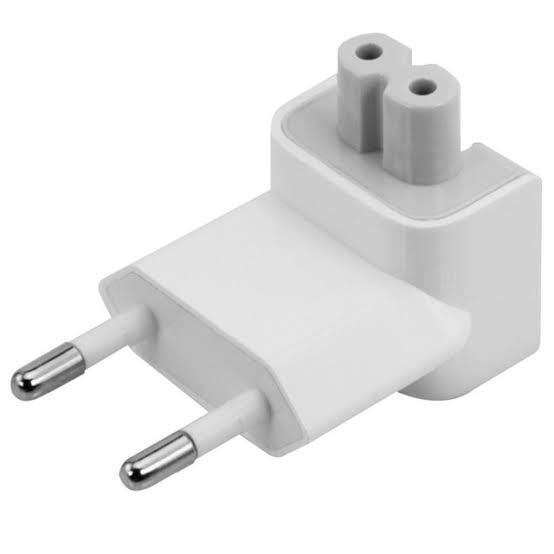 As long as you replace only the sliding thingy you should be (relatively) fine, since it only connects the charger to the power outlet although also there you could encounter a lousy produced example of course...(and then hopefully you have good circuit breakers).

I have three (EU) duckheads that I use and two of them are not so nicely aligned with the chargers. On the left you can see a set I bought via Tokopedia, the right was a duckhead only via AliExpress:

You can see the cracks and even a color difference. But the one on the left is a fake too of course.

But in fact I did not encounter any issues over the years, even with (obvious) non official chargers. But the combination of certain USB/Lightning cables and chargers didn’t work anymore after some time.
Last edited: Feb 25, 2019
R

Felicity said:
there's no electrical components inside the long cable version as well?
Click to expand...