Nope, we're not talking about the Volkswagen Beetle, the Kia Sephia nor the tiny city car from Depok called Mobira.

It does seem Nissan has awakened the giant (i.e. Toyota) with its cheap people's car brand, Datsun. Although the Go and Go+ -conceived and made in India- are not a huge success in RI (you see them once in a while as Uber car), they did make the market leader somewhat nervous. Or excited about new opportunities in a new (middle class) market segment, who knows?

For those who are not aware; Nissan wanted to create a car for the masses and did so by reviving an old name: Datsun. These are not mini cars but have the size of the respectable Toyota/Honda/Suzuki models even with three rows. And that for under $10,000! Obviously you do get some older technology and less safety features then. But hey, it is proven technology.

So Toyota and its evil stepdaughter Daihatsu have come up with a new car positioned under the Avanza and Xenia. They are called the Calya and Sigra. Both are somewhat smaller (also engine wise) and more simple than their siblings but have a similar 3-row interior.

The Daihatsu version is priced between 107 and 147 juta. Which is around that $10K price mark. If I were looking for a car at that price point: Instead of buying a three year old Xenia, I would definitely consider these. Of course this completely fits the approach of all car manufacturers; the car models get bigger and more luxurious in every generation. So this way you can put a new (smaller) model underneath.

The dashboard reminds me a lot of the (older) Honda Freed... 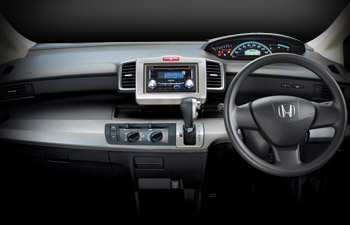 I agree with you jstar, if you want to spend not more than 140 jt for a car buy this Toyota Calya or the cheaper Daihatsu equivalent. Last week I saw this Calya exposed in a shopping mall, this car is surprisingly complete with dual airbag, ABS breaks, rear parking sensors, rear air circulator, electric mirrors etc etc. So yes don't buy any expensive second hand car. (I sounds now like a Toyota sales man

If it's positive it needs to be said too, right?

I saw the new Sienta in Mal Kelapa Gading yesterday. Not bad, it has a bit of a Yaris look. For younger audiences who don't like the NAV1.

jstar said:
If it's positive it needs to be said too, right?

I saw the new Sienta in Mal Kelapa Gading yesterday. Not bad, it has a bit of a Yaris look. For younger audiences who don't like the NAV1...
Click to expand...

A few year back we were in the market for a new car and considering a Yaris. Hombre, a prolific former old-forum member, provided some hard information suggesting that the Yaris was not up to the usual Toyota standards, particularly in the fit and finish, engine performance and durability categories. We eventually ended up buying something else.

The new stripped down Avanza may be similar to the Yaris. In any case, it is usually good advice to avoid purchase of any new model for a year or two -- gives the manufacturer a cycle or two to find and fix all the glitches.

Besides, there is supposed to be a new Delorean coming out next year.
Last edited: Aug 29, 2016

Probably you can not compare most of the cars dedicated to the south Asian market with those in the US and Europe. I don't see them giving 5 year warranty on an Avanza for instance. A RAV4 is much better than a Rush, even if they look alike. But many (as the Sienta and Nav1) are developed for the Japanese market. And at the end of their life span or pre-facelift, they also start to sell them in RI. Now with these cars you do get a higher quality and more up to date technology.

The Yaris is indeed a different model as in Europe for instance. The Honda Jazz is a much better car than the Toyota Yaris. Although I think the Yaris looks better...

waarmstrong said:
A few year back we were in the market for a new car and considering a Yaris. Hombre, a prolific former old-forum member, provided some hard information suggesting that the Yaris was not up to the usual Toyota standards, particularly in the fit and finish, engine performance and durability categories.
Click to expand...

I remember the discussion. He also in a separate thread advised the Honda Supra as being the best choice of motorbike in the 125cc category and he was the proud owner of one.
At the time, my wife was owning a Yaris and soon after I bought an Honda Supra 125cc, finding the Pajero or Triton not suitable for macet: .

The Yaris has been used for heavy duty going down back and forth on the Transulawesi to Palu (1000 km of rough roads) and even Makassar (2 days driving on even rougher roads), carrying loads which she was not supposed to carry. We have used it both as a personal and professional car whenever we needed it (roughly on a daily basis it has carried loads exceeding 200 kg + passenger).

The Yaris, 6 years+ after is still GREAT. The engine (properly serviced) and the car in general doesn't look its age nor its intensive use seem to have hamper its performance and general looking.

Am I satisfied with my investment? Perhaps it wasn't cheap at IDR 200jt+ (but anyway no cars are cheap in Indonesia) compared to what it is worth in Europe or elsewhere, but it was definitively worth it and I am much more satisfied than any of my friends who own a competitor model in any other brand.

The Honda Supra? A total sh1t. Any time I use it I have troubles or notice something wrong. My old Yamaha Jupiter 100cc was doing a much better job. I've been servicing the Honda as it should but it is not worth the praise it had been given by said member in the old forum.

In both cases, advises given were off mark.
Though the Yaris is still looking almost new, the Honda Supra is now parked in an area of our warehouse and I only use it whenever I don't have the possibility to borrow a motorbike from any of our staff members. Meaning very rarely.
Last edited: Aug 29, 2016

Too bad Hombre is not around to add to the discussion.

My son had a Yaris a few years back, not a lemon, but neither was it anything to write home about. He has Hondas lately.

waarmstrong said:
Too bad Hombre is not around to add to the discussion.
Click to expand...

Retrospectively I enjoy this comment in one of the posts.

My evaluation was simply that you get, more or less, the same thing with Livina as with a Yaris, but the Livina is costs less.
Click to expand...

Not sure if he had owned and driven both. I think not. I did owned both and my evaluation would be totally different. After about two year we have sold the Livina. First and last time I have bought in Indonesia anything different than a Toyota or a Mitsubishi.

This being said, I have also enjoyed re-reading my comments about the Honda Supra and Avanza for example. Years after, having owned and driven them, I guess that what I would write about them would be different. I am however not sure that I would be objective about Avanza. We have had so many headaches, not related to the mechanic or the car itself, with the Avanzas we have owned that I may be biased. We still have two of them and anytime I pass by any of them in our parking lot I have to take a good breath not to kick them as a matter of revenge.

Perhaps that other posters in the thread, if they had owned for some time one of these vehicles, would have different advises than what they gave in the thread. Talking about reliability without having experiencing it oneself seems a bit odd to me.
Last edited: Aug 29, 2016
S

I cannot complain about Avanza is serving me well. I had not a single issue with it. As for our personal car Rio Kia I can say.... I wish it had suspension a bit taller. As for the rest I am very happy with it.

The problem is of course that many problems only occur after some time. Even a JD Powers is not very realistic since they measure after the first 6 weeks or so. (And then Kia scores great for instance, Mercedes rather bad.) It could also be that owners of premium cars coughing up a huge amount of dough, are faster to complain.

On European car forums there is an everlasting discussion between the francophiles and the german car lovers. With the italian afficionados and japanese car owners as different groups altogether. The first group is -unlike the second- willing to forgive the occasional squeek and not so perfect seams in the body work, as long as the driving experience is very pleasant.

Let's face it, both (so finishing level and driveability) of the cars made for markets as India and Indonesia, are not that great. But you could ask yourself if that is really necessary; I drove a M3 from a neighbor and it was hell on the roads over here, like a bouncing ball. And the moment you soften the suspension, you get an American car effect; comfortable but boat like.

On European car forums there is an everlasting discussion between the francophiles and the german car lovers. With the italian afficionados and japanese car owners as different groups altogether. The first group is -unlike the second- willing to forgive the occasional squeek and not so perfect seams in the body work, as long as the driving experience is very pleasant.

At home in Europe we consider Japanese and German cars are no 1 with German cars cheaper (spare parts ect.).
French and Italian cars are in the same category.
I am amazed that we don't have extra groups like British or Swedish cars.

Perhaps it plays a role that those brands are not really their countries' pride anymore since they all (Volvo, Landrover & Jaguar, RR, Bentley, Aston Martin, Saab) belong to Chinese, Indian or German companies or even equity funds.

A Volkswagen AG is still partly owned by a German state (kind of province) and Renault and PSA are also still -partly at least- in French hands. And the Fiat group is doing very well (because of the American branch).

Over here the preference for brands is also rather strong; especially Toyota and Honda have a very good name. The weird thing is many people don't seem to realize Daihatsu is the same as Toyota in just a bit different trim etc. and they see it as a Toyota clone they don't want.
B

Saw a Cayla up-close at the Kelapa Gading mall last weekend. Nice especially for Rp 160,000,000 (Matic, middle model). When I commented about the 1200 cc engine, it was quickly defended by the sales person..."it's a CITY SUV-car...perfect for just going around town (Jakarta). Not sure if you needed a 'bensin campur' if you go up against the ascending roads of Puncak...

It was a nice car though. 1.5 Liter engine would've probably sold me.

^
Did they quote you a higher introduction price Banana? Or was it completely OTR? The list price of the most expensive Calya model for Jakarta is 150 juta...

Users who viewed this discussion (Total:23)