From Thailand to Indonesia

I'm asking for a sanity check.

I was living in Thailand for 4 years... Chiang Mai.. also a small island in the south and Krabi. Thailand was "just ok" for me.

My biggest gripes about Thailand were un-freindly people… dangerous roads and women... Generally... Were only enthusiastic about my wallet and not me.
Bali... Is great... Very freindly..both males and females are curious and welcoming. Ladies seem more authentic and thier English is far superior to Chiang Mai for an example

Has anyone else recently moved here from Thailand?

I only know of @Balifrog and @vocalneal dwelling in Thailand rather 'recently' and @William King (who left for Eastern Europe) and @atlantis in the very far past....

Balinese are not unique among Indonesians in their friendly disposition, in my limited experience, anyway.

One of the reasons I've stayed here all these years is the friendly attitude of ethnic original Indonesian people from all the different islands. Ok, tourist traps are universal, but the regular guy on the street is generally a pretty good guy.
B

Note that I have only a limited knowledge, living in Bali only since 18 months, and knowing only Bali and a small rural area in Banyuwangi regency (East Java)
But even inside Bali there are big differences. I live in Sanur, which I find perfect for retirement, but Kuta, Seminyak are very different and much more hectic. Ubud is again a different environment, and TBH I strongly dislike the place. Probably because I am not an artist, a yogo lover or a Katmandhu generation. And not a digital nomad ...
Y

Thanks for the your reply Balifrog! I started my exploration of Bali in Sanur... I'm actually in a Sydney suburb right now.. No wait.. KUTA... the two are very much the same. Sadly. I arrive in Ubud Tuesday.. Tomorrow and circle back to Sanur on the 29th..a place which is my favourite so far.
B

Yoyo dadda said:
Thanks for the your reply Balifrog! I started my exploration of Bali in Sanur... I'm actually in a Sydney suburb right now.. No wait.. KUTA... the two are very much the same. Sadly. I arrive in Ubud Tuesday.. Tomorrow and circle back to Sanur on the 29th..a place which is my favourite so far.
Click to expand...

If you like, when you return to Sanur we can meet up for a beer ?
Share a few Thailand stories, and maybe I can share with you some of my humble knowledge of Sanur.

And be reassured, I am a frog but a bearable one !

ps : I did the same as you when arriving, explored Kuta, Sanur, Ubud and Sanur came out easily as the winner.
Y

Omg. You're a frog? As in French... Great.. I'm British?. We can drink beer and solve the world's problems. I'll contact you upon my arrival in Sanur. Thanks. Merci.
H

Minuteman said:
One of the reasons I've stayed here all these years is the friendly attitude of ethnic original Indonesian people from all the different islands. Ok, tourist traps are universal, but the regular guy on the street is generally a pretty good guy.
Click to expand...

My wife and I were in Thailand a few weeks ago and then on to Myanmar and now in Nepal. We agree that people are generally much friendlier in Bali than these neighbouring countries. More smiles from Indonesians in just casual encounters or passing in narrow lanes. Looking forward to being back home in Bali on the 28th. (And hoping the airport in Denpasar is back to smooth operating after fire and computer malfunctions and that Mt Agung doesn't get stroppy. Not to mention the possibilities of lunatics with bombs. What a ghastly business in Sir Lanka.)
L

I lived in Thailand for five years and came to Indonesia again in March last year. I lived on the outskirts of West Bangkok and now live in North Jakarta, so perhaps that is a reasonably apples to apples comparison. I've also lived in Taipei, so I'll throw that into the mix too as a large Asian city but perhaps not on the scale of Bangkok or Jakarta.

I love both Bangkok and Jakarta for their culinary options and their adopting locals, I've had a lot of positive experiences in both places and a couple of negative ones. Mostly the difference for me is that locals in Jakarta more often take the time to ask me where I'm from and why I'm here than the Thais did in Bangkok. I must say though, that I always felt welcome in Thailand, just that the locals weren't enamoured (amused) as easily just because I was foreign.

I guess there are plenty of ladies in Thailand that are gold digging after a rich farang (bule) but equally plenty of my friends are happily married and starting families there. I came back to Jakarta (I spent a year here in 2010) primarily because there is less competition for teaching jobs and thus securing a decent paying gig was a bit easier. A couple of years ago I fell over at a waterfall and had stitches on the island of Koh Kood. When the time came for the stitches to be removed, they had become infected. This meant that I had to make daily trips to the hospital in Bangkok in order to get the wound cleaned after it had been reopened, cleaned and allowed to heal. It was during one of these trips that I left my wallet in the back of the taxi with about 4,000 baht in it (I'm a dumbass and shouldn't have been carrying this much I guess). Regardless, I informed the nurseonce I had realised using my incredibly flawed Thai and she went out of her way to find the parking attendant and check the CCTV. Between them, they found the license number of the taxi that I was in, called the company and within a couple of hours the driver had returned to the hospital and returned my wallet to me. Granted, this wasn't in a tourist haunt but I felt really good about living in Thailand and about the local people there on that day.

On the negative side of things, there are times that I hate(d) both Jakarta and Bangkok. Lots of traffic, pollution and the difficulty in getting some simple things done can be a massive ball ache. However, I then have to remember why I have chosen to live in Southeast Asia and that somewhat eases my, at times, impatient bule temperament. I liked the locals in Taipei too, but I didn't really connect with the local culture as well as I feel that I do here or in Thailand. And the bonus of Taipei was the fact that you could head to places like Wulai and Yang Ming Shan NP and be in relatively natural surroundings within an hour using public transport. Bangkok, has some good public transport and that is something that I feel is still being worked on in Jakarta, however it is much better than when I was here in 2010. As far as holidaying goes, I'm more of a Lombok man than a Bali man I think. At least as far as the Kutas go!... And Taiwanese cuisine has nothing on Nasi Padang or Isaan food!

I hope at least one person can make it to the end of that without falling asleep! haha Cheers

Lee Bale said:
As far as holidaying goes, I'm more of a Lombok man than a Bali man I think.
Click to expand... 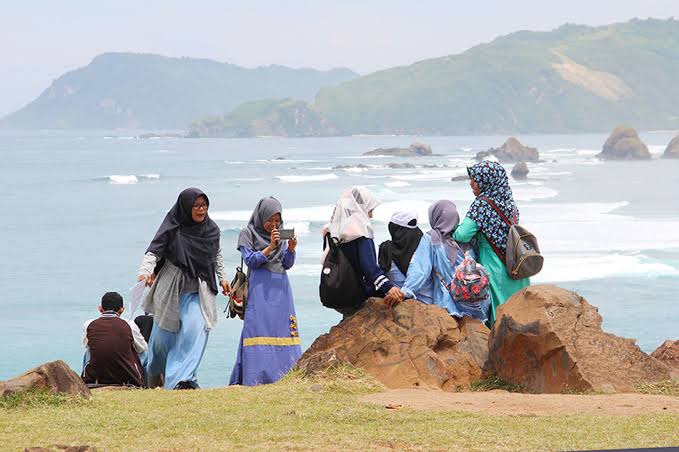 I do prefer the Seminyak (okay if you twist my arm; Sanur) beaches.

Its true that Lombok is predominately Muslim, but there are many beaches where Halal and Western beach attire co-exist. After all, tourism is where the money's at. I do recall noticeably fewer inebriated Australian 20-something tourists stumbling around Lombok beaches, compared to Bali.
Last edited: Apr 23, 2019

Not really true; the Indonesian tourism board tries to position Lombok as a Muslim-friendly vacation destination. They have a rather active promotion of this concept in countries as Malaysia.

waarmstrong said:
Its true that Lombok is predominately Muslim, but there are many beaches where Halal and Western beach attire co-exist. After all, tourism is where the money's at. I do recall noticeably few inebriated Australians 20-something tourists stumbling around Lombok beaches, compared to Bali.
Click to expand...

This more reflects my experience with the beaches in Lombok. When I've been down in Kuta Lombok, we usually hire a scooter and take a 20-40 minute ride away from the resort. There are about 3 beaches that we frequent that are usually quite empty and there is always somebody selling questionably cold Bintang. I'm sure the tourist board does indeed market these beaches as halal and it is indeed possible that the situation on the ground may change. However, during my experience thus far, the situation on the ground is that the beaches in the area are stunning, largely empty and fat 30-something white-man friendly haha...

As far as Bali versus Lombok goes, on a recent trip to Sanur, I feel that the beaches are nicer in Kuta (subjective anecdotal evidence, I know), but that the service in restaurants in the resort itself and the sheer choice of cuisines available is superior in Sanur. I spent a week in Sanur and ate Indonesian, Mediterranean (Spanish, Italian Greek "fusion"), Italian and Indian food (and more I just can't really remember haha). One key observation for me is that service in restaurants is way more efficient in Sanur as compared to Kuta, and I really liked that I could sit around and read without being disturbed by street sellers coming in and peddling their wares. In my experience, the restaurants in Kuta have allowed sellers to enter the restaurants when I've been trying to enjoy dinner with friends and on occasion, the frequency with which we have been asked to look at trinkets has been a little annoying. Overall though, these things just seem to be a part of the tourist experience in Bali/Lombok and both places have a lot to offer. That's just my Rp. 2,000 worth haha

Yes the beaches on the Sanur side, (the Dutch tourist and retirees side) are more like small pebbles than sand. As mentioned, the low hassle factor and broader choices of cuisine weigh heavily in my selection criteria; also less congested in my experience.

My experience in several visits to Lombok was as described, notwithstanding how the place is promoted.

For the sake of clarity I think it's better to compare Bali's east coast to west coast.

With Kuta (even when it's rather big) people generally mean the congested beach town at the Hard Rock etc. The Asian version of Lloret de Mar or Daytona Beach.

For retrirement it would be better to talk about the beach towns Seminyak (more North than Kuta, further than Legian) and Sanur. The former has my strong preference but I know many disagree, mainly because of the walk/bike road parallel at the beach in Sanur; in Seminyak you'd have to stroll on the sand to follow and enjoy the sea. Sanur also has more restaurants with sea view, in Seminyak you'd have to visit the resorts.

The sea and (and thus surfing possibilities) is much wilder in the west, where there are sandbanks and where the sand area is not a as deep. Our son prefers for that the southwest btw, the Jimbaran edge at Suluban etc.
.
Show hidden low quality content
You must log in or register to reply here.
Share:
Facebook Twitter Reddit Pinterest Tumblr WhatsApp Email Link